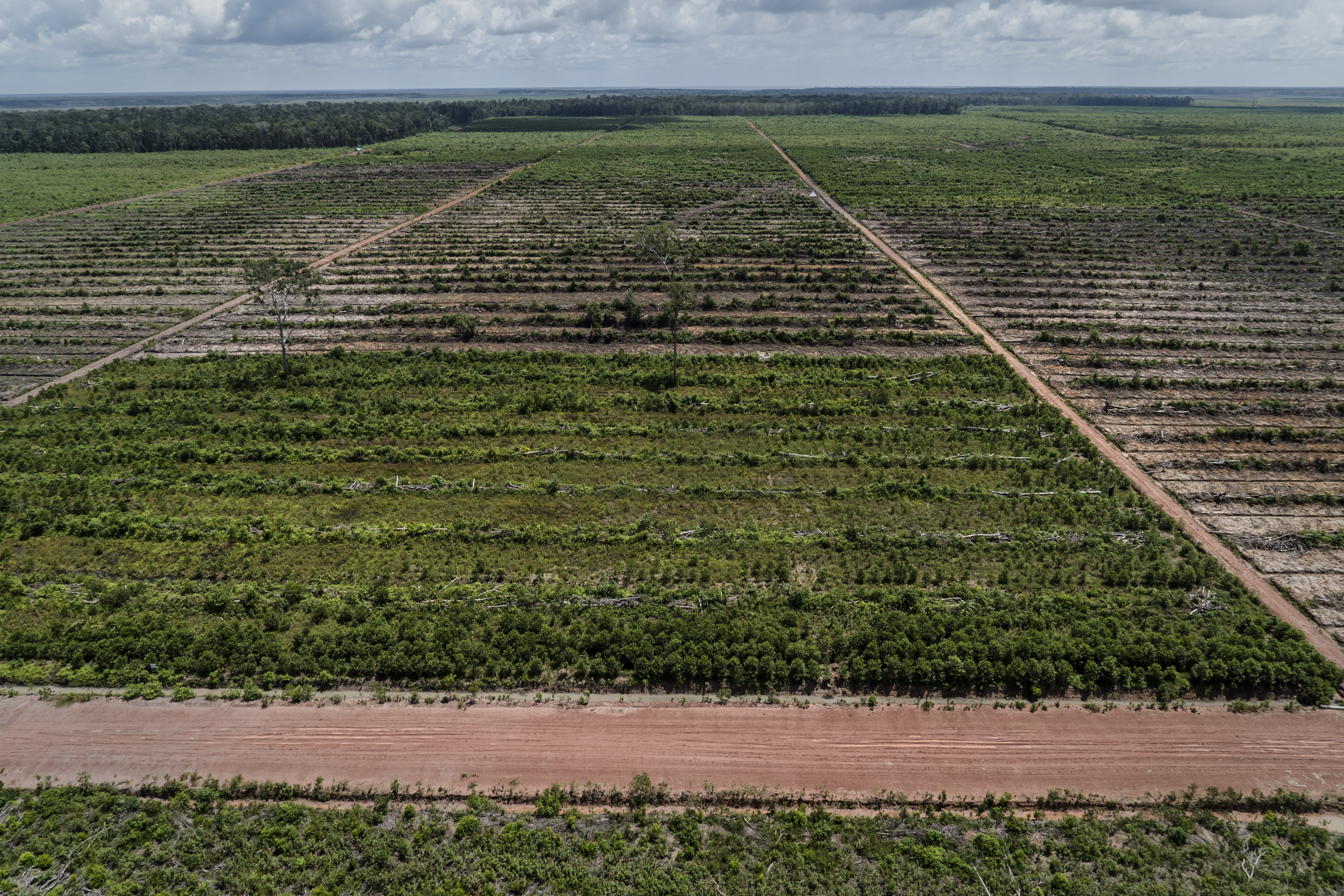 The rate of deforestation caused by the production of pulp, a wood product used to make paper, has decreased significantly in Indonesia since reaching its highest point in 2011 (as seen in the white bars in Figure 1).

Despite this positive trend, the pulp and paper industry in Indonesia continues to cause extensive deforestation and exploitation of peatlands.

In 2022, a larger area of primary forest was converted to plantations (acacia and eucalyptus) than the previous year, with 25,887 hectares being cleared in 2022 and 12,320 hectares cleared in 2021 (white bars in Figure 1), indicating a doubling in pulp-driven deforestation and the highest level since 2014.

Another FSC-certified company is pulping natural forest in Papua to produce eco-friendly paper.

Over the past 22 years, the expanding pulp and paper industry in Indonesia established 3.05 Mha of plantations, the size of Belgium, and converted 1.02 million hectares of forest in the process, destroying animal habitats and biodiversity while turning vast areas of carbon sink swamp forests into fire-prone wastelands.

This deforestation represents 10% of Indonesia’s total loss of old-growth forests (10.19 Mha) recorded over the two decades, including 630,000 ha of ecologically sensitive peat-swamp forest cleared. In addition, the industry drained 1 million hectares of peat swamps for plantations, about one-third of the total Indonesian peat swamp forest destruction of 3.2 million hectares over two decades (2001-2021).

Table 1. The list of companies who developed new plantations at the expense of forest in 2022, ranked from worst to least forest destroyer. This table includes the amount of forest on mineral soils converted and the amount of peat-swamp forest converted.

Table 2. The list of companies who developed new plantations at the expense of peatlands in 2022, ranked from worst to least peatland destroyer. This table includes the amount of forest and non forest on peat converted.

TheTreeMap endeavours to protect tropical forests through scientific research and advanced monitoring platforms. We are cartographers, remote sensing engineers, software developers, and field investigators.  We empower civil society with the tools to detect deforestation in real-time and ensure what happens on the ground is fair, transparent, and democratic. We build systems that check the deforestation footprint of agribusinesses in tropical forests to ensure sustainable production. Our work is based on the premise that no one wants food and other products to be the cause of forest destruction.

Palm oil-driven deforestation in Indonesia slowed to a 20-year low in 2021 and is stabilizing in 2022. It is good news, but we see worrying developments in Tesso Nilo National Park, Riau Province, Sumatra. Deforestation is accelerating again in Tesso Nilo. Despite genuine and dedicated conservation efforts by the Park Office, the rampant, and illegal clearing of […]